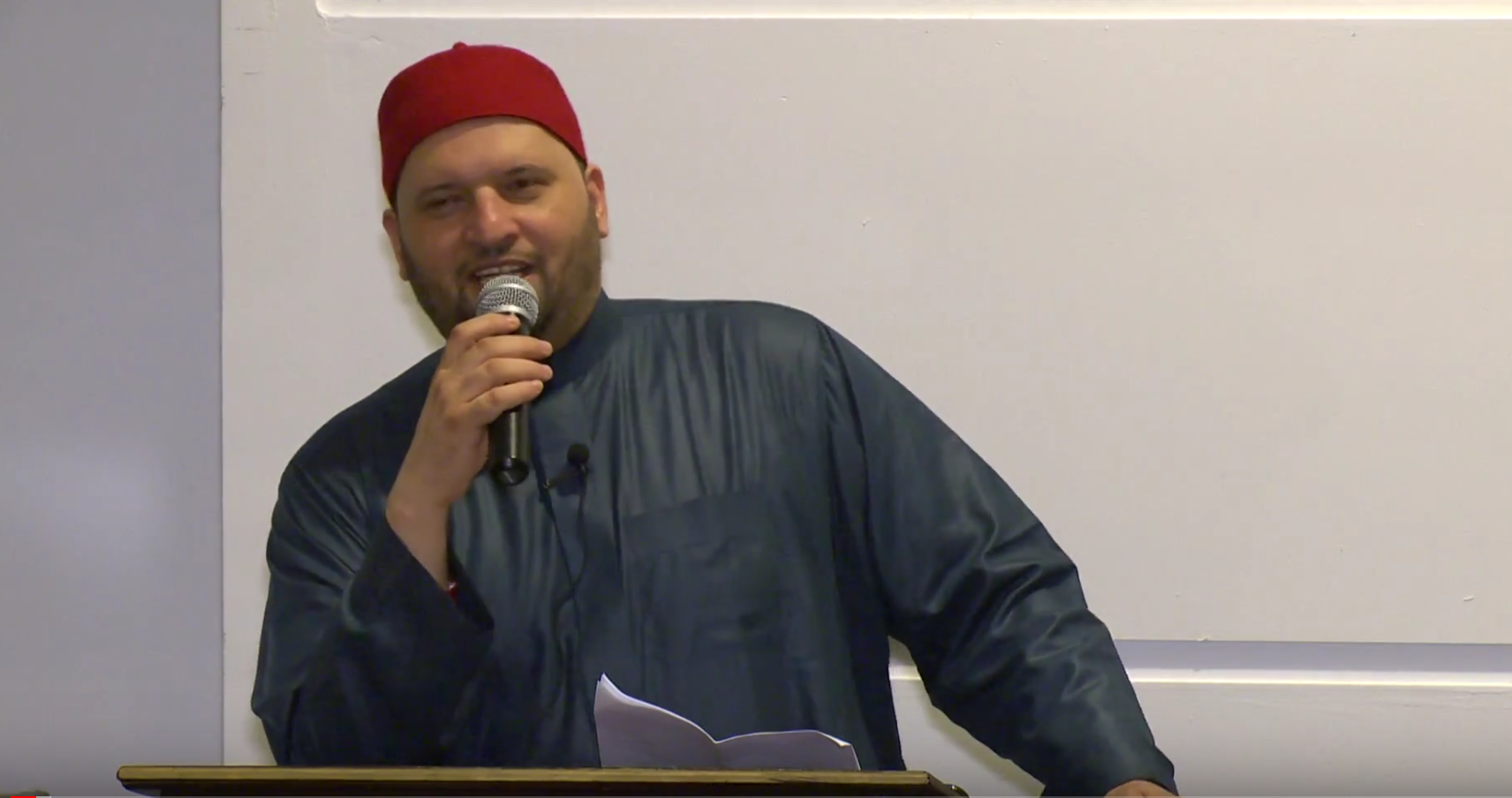 The Delusional Understanding of Quranic Verses by Radical Groups Part I

Following is an in-depth, methodological, scholarly discussion of the words and theories of Daesh and measure them against the parameters of Islamic law, Islamic legal theory, and the approach of mujtahids (scholars who are qualified to make independent legal reasoning) and leading jurists. The aim is to determine whether Al-Qaeda Separatists were able to build a solid jurisprudence that conforms to juristic provisions and the objective of Islamic law—a jurisprudence that evokes its mercy, guidance, and morals—or whether theirs is faulty, confused, delusional, misguiding jurisprudence full of dubious, impulsive, and irrational notions—a jurisprudence that originates from profound ignorance and reckless fervor, and falsely attributes to the Qur`an what it does not preach and atrocious crimes to Prophetic reports.

In truth, this group does not possess any kind of jurisprudence or knowledge. They bring to mind the words of Ibn Abbas (may God be pleased with him) which he addressed to the Khawarej when he told them, “I have come to you from the Prophet’s Companions from among the Muhajereen and Ansar to tell you what they are saying. The Qur`an was revealed in their presence and they are more knowledgeable of it than you; not one of you is among them” [recorded by Al-Nisa`i in Al-Sunan Al-Kubra, Al-Hakem in Al-Mustadrak, Al-Baihaqi in Al-Sunan Al-Kubra, and others].

Daesh is a sect of a blood thirsty infidelizing group. Its members have broadcasted to the West a fabricated image of Islam and every form of atrociousness: they accused Muslims of disbelief, slaughtered people, frightened and displaced non-combatants, and murdered hostages without just cause. They perverted the understanding of Islamic law, interpreting murder as a basic principle and subordinating mercy to it. For this reason, it was necessary to explain the serious mistakes and transgressions they have committed against Islam.
What follows is an overview of the types of flagrantly flawed beliefs of Al-Qaeda Separatists which we will commence to deconstruct. In the coming episodes, we will present an example of each mistake as follows:

Al-Bukhari recorded a non-Prophetic report narrated by Ibn Umar (may God be pleased with him) who said that among the distinctive characteristics of the Khawarej’s methodology is their misunderstanding of the Qur`an and the use of their aberrant understanding to scare and murder people. It was reported in the Sahih of Bukhari that Ibn Umar (may God be pleased with him) said, “They used verses which were revealed concerning disbelievers to refer to believers.” Hudhayfa (may God be pleased with him) said, “The Messenger of God (peace and blessings be upon him) said, ‘The person I fear for you the most from is one who has read the Qur`an and felt the radiance of its beauty and grace, but changes it, throws it behind him, and takes up the sword against his neighbor and accuses him of associating partners with God.” He [Hudhayfa] then said, “I said, ‘O Prophet of God! Who is more deserving of being accused of associating partners with God—the accused or the accuser?’ “ The Prophet (peace and blessings be upon him) replied, “The accuser” [recorded by Ibn Hiban in his Sahih. Ibn Katheer deemed its chain of transmission good and Al-Haythami deemed it fair in Majma’ Al-Zawa`id].

Al-Qaeda Separatists commit abominable crimes against Prophetic reports—they take the Prophet’s words out of context and imbue them with the worst of meanings, violence, and savagery. They are totally ignorant of the tools of comprehending hadith, the rules of inference, the objectives of Islamic law and its principles. As a result, the words of the Prophet (peace and blessings be upon him) which fill hearts with peace and mercy and reverence for religion are replaced with ugly, bloody, distorted words which fill hearts with repulsion and fear.

The first mistake they make is to narrow the concept of jihad and restrict it to combat and slaughter with the claim that such distortions represent the jihad legislated by God. So much so that they have made jihad an end in itself when in fact it is a means to guidance. Whenever it impedes guidance, jihad deviates from its goal, back-firing to become a means of outright harm that repels people from God’s religion. The Imam, hadith scholar, and mujtahid, Taqiy Al-Deen Al-Subki (d. 756 AH) cites in his book Al-Fatawa(vol. 2, p. 340), the Prophet’s words to Aly when he sent him to Khaybar, “If God were to guide a single person through you, this would be better [for you] than red camels [a highly prized commodity].” The Prophet’s words in this instance suggest that guidance is the purpose of jihad. And wisdom requires this. Jihad means guiding the people and inviting them to monotheism and the laws of Islam and offering Islam to them and their descendants until the Day of Judgment. Nothing compares to this.

However, it is better to achieve this goal by imparting knowledge, engaging in debates, and removing misconceptions whenever possible. From this, we gather that the ink of scholars is better than the blood of martyrs. But if combat is the only alternative, Muslims are to embark on it to achieve one of the following three objectives: guide others, and this is the most superior objective; achieve martyrdom and this is of lesser superiority though an honorable way to die since it not only involves sacrificing what one holds dearest but because it is also a means to promoting the word of God and not an end in itself. As for the last of the three objectives, killing a disbeliever, it is the least superior because it is considered wasting the life of a potential believer who will in turn beget believers.

Deficiencies in the implementation and actuation of the system of jihad due to the following:

Error in ascertaining the cause of Jihad

There is no contention on the legitimacy of jihad but the problem lies in ascertaining its cause. It is imperative that ijtihad (independent legal reasoning) be made only by proficient scholars who understand the realities and conditions people are living under. A scholar who does not understand the realities and circumstances of people cannot issue a correct ruling. Imam Ibn Al-Qayyim said in I’lam Al-Muwaqa’een (vo. 1, p. 87), “Neither a mufti nor ruler is able to judge by truth except if he possesses two kinds of understanding. [The first is] understanding the context and deducing the knowledge of what has truly occurred through signs and indications. The second is understanding the religious obligation related to the context; it is understanding God’s ruling as expressed in His Book or by His Messenger with regards to that particular context.”

Some examples of mistakes committed by Al-Qaeda Separatists include: misapplying the ruling on using human shields, and in so doing erroneously and ignorantly permit the murder of Muslims. Due to their compounded misunderstanding of rulings and their misapplication, they kill innocents. Other mistakes include misapplying the ruling on initiating night attacks—they mistakenly interpret the ruling to mean the permissibility of targeting non-Muslims even if they are non-combatants, children, or women. They commit many other flagrant mistakes which they will wear as a yoke around their necks when they stand before God. It is mentioned in the book of Bukhari that a Muslim will continue to be sound in faith provided he does not shed blood unjustly.

A defective understanding of modern realities and conditions

Al-Qaeda Separatists’ defective understanding of realities and conditions under which people live is grievously alarming. This is because when they infidelize Muslims, declare their murder lawful, and believe that only they—apart from the rest of the two billion Muslims living in the inhabited world—represent Islam, they appropriate the functions of rulers such as calling for bay’a (selecting the leader via the oath of allegiance), jihad, and general mobilization. They consider their mistakes a decisive battle for the community whereas jihad is a legal ruling in Islamic law and not mere zeal and fervor. Thus jihad is subject to the five injunctive rulings. Jihad may be either obligatory, recommended, or prohibited according to the circumstances under which it is embarked, and its objectives and consequences.

God has legislated both the rulings and the conditions and circumstances that cause them to be lifted. Though jihad is valid in principle, it may be invalid in practice because it does not meet the necessary conditions and required legal criteria. As such, jihad is tantamount to aggression, murder, and destruction. Speaking of the recommended measures for ablution, the Messenger of God (peace and blessings be upon him) said, “Whoever does more than this, is blameworthy and transgresses.” If the Prophet deemed using more water for ablution than what is legally necessary to be wrong and offensive in spite of the fact that the use of water is a personal matter, a fortiori slaughtering others, shedding blood, and frightening non-combatives indiscriminately without having any legal bases for such action!

The matter therefore devolves to their pandering to their own whims and satisfying their sick appetites for leadership and control. Al-Qaeda separatists attribute their sick crimes to the munificent Islamic law, and as a consequence repel people from religion. Jihad is a religious ruling. At certain times and under certain conditions it is a duty. But without a legitimate cause and purpose, it is proscribed as if it is divested of its defensive goal, and answers only to a savage desire for murder and control. Imam Al-Qarafy said, “Just as God legislated rulings, He likewise legislated the circumstances that cause them to be lifted.”

A defective substantiation based on incidents from the Prophet’s biography

There are rules for deriving rulings from the Prophet’s biography and from the incidents contained therein. Whoever is quick to analogize a particular incident to one in the biography of the Prophet (peace and blessings be upon him) stands guilty of fabricating lies against him and imputes to his law what is antithetical to it; whoever fabricates lies against the Prophet (peace and blessings be upon him) is to await his seat in the Fire. Imam Al-Zarkashy wrote in Al-Bahr Al-Muheet (vol. 4, p. 571), “Behind this is great calamity! This is because a [muqallid (a person who follows the legal opinion of a mujtahid i.e. a scholar who is qualified to engage in independent reasoning)] may experience the same incident on which a Companion issued a legal verdict yet may reach an erroneous legal ruling. This is because analogizing incidents is one of the aspects of jurisprudence that requires the greatest [degree of] accuracy and one that is most subject to error.”