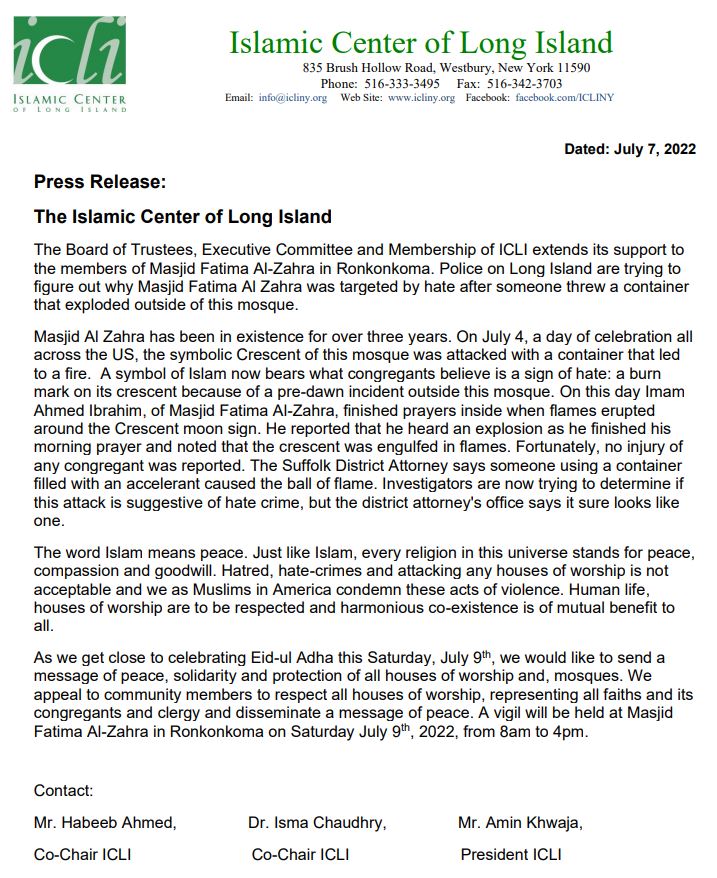 The Islamic Center of Long Island

The Board of Trustees, Executive Committee and Membership of ICLI extends its support to the members of Masjid Fatima Al-Zahra in Ronkonkoma. Police on Long Island are trying to figure out why Masjid Fatima Al Zahra was targeted by hate after someone threw a container that exploded outside of this mosque.

Masjid Al Zahra has been in existence for over three years. On July 4, a day of celebration all across the US, the symbolic Crescent of this mosque was attacked with a container that led to a fire.  A symbol of Islam now bears what congregants believe is a sign of hate: a burn mark on its crescent because of a pre-dawn incident outside this mosque. On this day Imam Ahmed Ibrahim, of Masjid Fatima Al-Zahra, finished prayers inside when flames erupted around the Crescent moon sign. He reported that he heard an explosion as he finished his morning prayer and noted that the crescent was engulfed in flames. Fortunately, no injury of any congregant was reported. The Suffolk District Attorney says someone using a container filled with an accelerant caused the ball of flame. Investigators are now trying to determine if this attack is suggestive of hate crime, but the district attorney’s office says it sure looks like one.

The word Islam means peace. Just like Islam, every religion in this universe stands for peace, compassion and goodwill. Hatred, hate-crimes and attacking any houses of worship is not acceptable and we as Muslims in America condemn these acts of violence. Human life, houses of worship are to be respected and harmonious co-existence is of mutual benefit to all.

As we get close to celebrating Eid-ul Adha this Saturday, July 9th, we would like to send a message of peace, solidarity and protection of all houses of worship and, mosques. We appeal to community members to respect all houses of worship, representing all faiths and its congregants and clergy and disseminate a message of peace. A vigil will be held at Masjid Fatima Al-Zahra in Ronkonkoma on Saturday July 9th, 2022, from 8am to 4pm.

An Explanation of Surah Maryam